A Multi Photographer Business in Weeks, Not Months

Thanks to Tourbuzz, Beyond Virtual Tours Had a Custom Branded Real Estate Platform Developed in a Flash

When real estate marketer Tami Perry and photographer Chris Ricketts met in 2011, they were working with a national virtual tour franchise that had little interest in promoting contractors' brands.

In addition to having their brand visible, they also wanted to make all the money from real estate they shot—not just 73 percent.

"They took 27 percent of everything," Perry says, "They promoted themselves. They didn't promote contractors' photography."

Shortly after meeting each other, it became clear that Perry, who had marketing experience from running her own flyer business, and Ricketts, widely known as one of the best virtual tour photographers in the San Francisco Bay area, had everything it took to start their own business…

Except a virtual tour platform.

They knew building one from scratch was too expensive. It was the last hurdle to jump before starting their own business together.

So they decided to go with a third-party virtual tour developer. For eight months the company struggled to get the kinks ironed out in its customer-facing interface.

Then they found Tourbuzz, which offered innovation her now former technology partner couldn't offer: seamless operability on all major browsers and iPad/iPhone as well as smooth full-screen capability. Most importantly, she was now able to build her own tour player that would establish her company's brand.

"What Tourbuzz did in one month, my former virtual tour developer couldn't do in eight," Perry says. "Tourbuzz built our tour player so quickly. Those guys have been unbelievable in the options they offer, the customization, the expertise, and their skill. I've never seen anything like it, and I've been doing this for 30 years."

In starting a new business, development costs haven't buried the fledgling company. That's because Tourbuzz offered a custom white-label design based on technology the company already developed, for a price she could easily afford. Further, switching platforms was easy.

"By no means did Chris and I want to buy servers and figure out how to make this technology work," she says.

With her new platform, Perry became armed with powerful technology such as:

The video capability has been particularly helpful, Perry says. With 30-second vignettes, her agent-clients now get online face time, which helps them connect with buyers. She says it's like "having their own TV commercial."

In addition to great technology, Perry got a fully customizable interface that:

Tours in Less Than 15 Minutes

Now, no one can tell the platform wasn't developed by Beyond Virtual Tours.

Now, instead of a franchise paying them 73 percent, Perry and Ricketts purchase credits from Tourbuzz that can be used whenever they need to publish a tour. 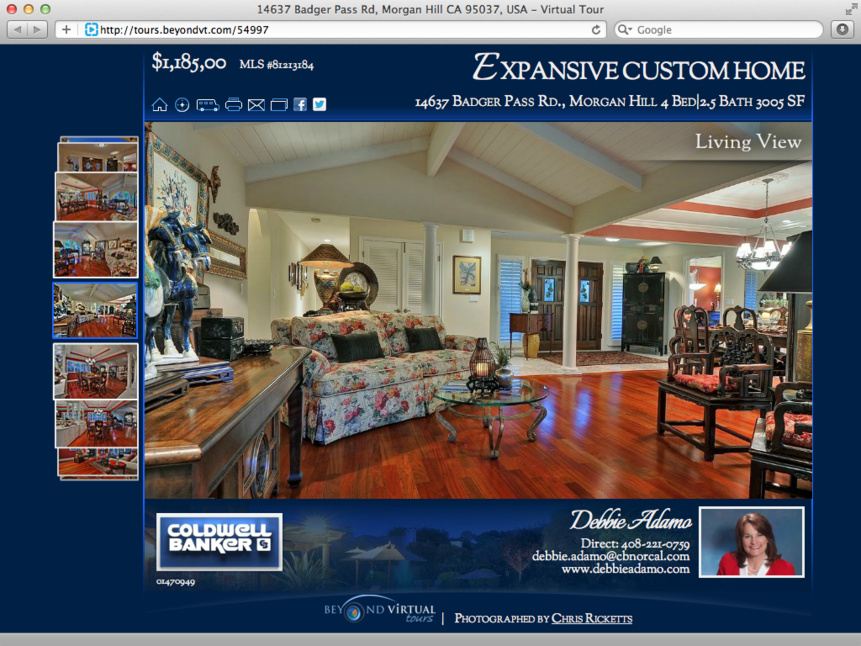 With Tourbuzz' platform, Beyond Virtual Tour' and agents' brands are clearly visible.

Prior to running into Tourbuzz, Ricketts was an independent contractor shooting photos for a franchise that controlled how he got paid. Further, his "independent" status was in question. Perry says there were restrictions on what kind of work he could perform outside the contract.

Now, she sends them to her own company.

"Tourbuzz' virtual tour platform drives traffic to our website, which promotes us," she says. "It's our business now, not some third party's."

Less than a year in, Perry and Ricketts have gotten so much business they've hired four photographers.

The Tourbuzz system is so easy, she says, her new team "has it down to a science" and uploads tours in less than 15 minutes. Plus, she receives leads from viewers clicking on virtual tours. In addition, she never has to worry about technology, as her platform is constantly improving.

She's even thinking of taking her company national, since the Tourbuzz platform supports multiple photographers and manages workflow.

"If it wasn't for Tourbuzz," Perry says, "I would've had to pay for servers and shell out thousands of dollars for a custom developer to create this from scratch."